The STI Staccato-P is the USMS SOG’s newest adaptation

The STI Staccato-P is the USMS SOG’s newest adaptation 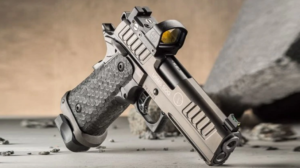 There has been plenty of speculation about the newest service gun for the U.S. Marshals Service, and it has finally been confirmed. They’ve paired up with STI International and decided on using their 2011 Staccato-P. If you’re unfamiliar with STI, they’re renowned for their high-end competition guns often seen in the John Wick series.

It goes a bit further than that though, because it’s actually the STI 2011 Staccato-P-DUO, which is an Optics Ready version of the pistol. The DUO stands for Dawson Universal Optic system and is designed to work with popular optics such as the Leupold Delta Point Pro, Trijicon RMR, and most optics that use the same mounting platform. This model also hosts Dawson Precision Perfect Impact Sights which will co-witness with the optic in case of a malfunction. In this case, the USMS will be topping their slides with the Leuopold Delta Point Pro red-dot sight. 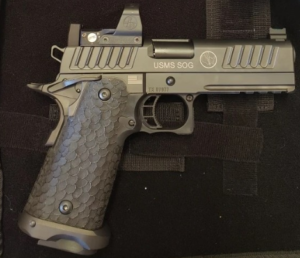 Many discussions have popped up across the internet gun groups about whether or not this degree of service pistol is warranted or not. I’ll leave that up to you.

Drew J. Wade, chief of the Marshal Services Office of Public Affairs explains that, “SOG deploys to enhance the tactical capabilities of the Department of Justice and the USMS operations, domestically and internationally”. He went on to say that some missions include a lot of specialty high-risk operations such as providing support for trials involving terrorists, moving high-threat prisoners and witness security members, and responding to national emergencies. He also informed everyone that the SOG unit has “extensive training in the operation of single-action pistols, which they feel best meets their tactical carry requirements”, and SOG had previously carried a Springfield 1911 platform for the last 16 years. 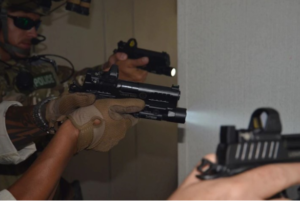 The Director of Law Enforcement and Military Sales for STI International, Buck Pierson, asked, “Who wouldn’t want a pistol that holds 21 rounds and can shoot super-fast, flat and accurately when you’re on duty?” STI has responded to increased interest from big-name LE tactical teams who are looking at their 2011 platform for the same reason that competition shooters do: lighter recoil, higher magazine capacities, incredible accuracy, and reliability.

The model the USMS finally selected was a result of feedback from SOG itself. They evaluated various 5″, and 4.25″ rail gun models, and realized that changes needed to be made. Peirson said, “The guns just had solid black sights. They didn’t have ambidextrous safeties on them. They didn’t have tactical mag wells on them, and they were blued.” He continued, “With the Marshals’ guys specifically being in Louisiana, the humidity out there were getting the guns to rust from being outside for multiple days.”

The final result? A durable Diamond Like Carbon finish across the entire gun, Treebark stipple grips, a slim tactical mag well, and a 4.15-inch bull barrel.