Last week (1st October) the Dutch military conducted a counter drone trial using SMASH 2000+ in combination with the issued Colt 5,56 assault rifle. A group of about 15-20 soldiers of all branches attended (Air Force, Marines, Army, Special Forces, Procurement Agency, Maintenance office). The group was trained before the test in the morning. Most of the soldiers were new to the system. In the afternoon the trial was conducted.

A variation of drones were shot at 75-150 meters. Both stationary and moving.

The overall result of the test was good. All drones could be shot down quickly. The MoD already published a report stating that they want to start the procurement process soon:

Smartshooter shoots drones ‘automatically’ out of the air

The threat from unmanned aircraft systems (UAS), or drones, is growing rapidly. The Air Force detects many UAS movements at airfields and they often pose a serious threat to air traffic, among other things. The use of the personal firearm by surveillance units is, for the time being, the most realistic option against this threat. However, this is not effective. A state of the art system can change this in the long run. 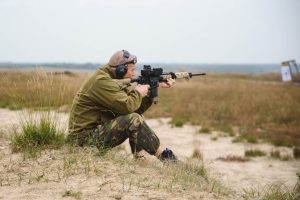 The Air Force was already familiar with the possibilities of the smart guidance system Smartshooter. The only question unknown was whether it was also effective in combination with the Colt C7 5.56mm long-range rifle. 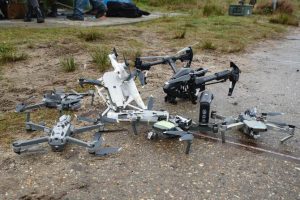 As soon as the system ‘sees’ that the target will be hit, the Smartshooter ‘automatically’ fires the weapon. It doesn´t work autonomously. The shooter selects, aims and pulls the trigger.

When the Army organized a shooting day to experiment with the Smartshooter system, the Air Force joined to test its effectiveness against drones. Shots were fired at an average of the top 10 UAS detected by the air force in the Netherlands.

The Colt in combination with the Smartshooter system proved effective: several targets were eliminated within a few shots. However, the system still needs further investigation and development. Not only technically, but also in terms of the way in which it acted.