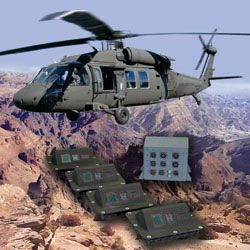 Responding to the Global War on Terrorism (GWOT) has become the focus of U.S. Defense policy, and with that, the need for greater intelligence collection has moved upward in priority. And whereas past reconnaissance needs were more strategic in nature, today’s needs are highly tactical, demanding a high level of persistence and the ability, in many cases, to identify individual humans in the field of interest. Many approaches have been employed and proposed, but in recent years, the exceptional capabilities of short wave infrared (SWIR) technology have made SWIR the “Next Generation” of imaging technology for ground, airborne and space technology.

Several unique capabilities and characteristics of SWIR make it a valuable asset in the war against terror:

Low Light/Night Vision Imaging: SWIR cameras from Sensors Unlimited can operate down to starlight conditions, receiving adequate illumination from the weak natural phenomena known as atmospheric nightglow. Nightglow is created by hydroxyl ion emissions in the short wave infrared portion of the spectrum.

Recognition of Target: Whereas long and medium wavelength infrared sensors are able to spot targets based solely on their heat emissions, SWIR cameras and sensors see reflected light in the shorter wavelengths just beyond the visible range. As a result, the images are close representations of what is seen in the visible spectrum. Humans are very recognizable, with the typical difference being that all hair shows as white due to the lack of moisture in hair; conversely, skin shows darker, due to its high moisture content. It is said that long and medium wave sensors provide detection, while SWIR and visible sensors provide recognition. The beauty of SWIR is that recognition can be achieved covertly in darkness.

Eye-Safe Laser Illumination: Lasers operating in the SWIR portion of the spectrum are eye-safe, meaning these wavelengths of light will not easily penetrate the cornea of the human eye. Thus, illumination by lasers at the common 1550 nanometer wavelength may be used to safely illuminate humans and targets.

Covert Illumination: In turn, eye-safe 1550 nm light is invisible to the human eye, BUT easily seen by SWIR cameras and sensors. An entire area may be lit with SWIR illumination that is totally invisible to the human eye, yet bright and clear to SWIR cameras. Similarly, a single target of interest might be illuminated by a focused laser beam for easy viewing or tracking. This is useful for designating specific targets for range finding, as well as other military-specific applications. SWIR cameras, sensors and imagers can play an important role in today’s ISR needs.

Whether aboard Collins Aerospace, mounted on rooftops and street corners, integrated into small crawling robots, or fitted to Special Operations Command vehicles and weapons, SWIR offers our defenders a new weapon in the war on terror. Many SWIR camera capabilities are considered sensitive. About Collins Aerospace: We design, manufacture and service systems and components and provide integrated solutions for commercial, regional, business and military aircraft, helicopters and other platforms. We are also a major supplier to international space programs.